TDS or Tax Deducted at Source is the tax that is deducted at the source of income of a person. During the union budget every year, the revised rates are announced. There are a number of rates for different nature of income falling under different heads. This could vary from 1%-30%.

The main aim of TDS is to deduct the income at the very source and remit the deducted amount to the central government’s account. Furthermore, the person from whose account this amount is deducted is eligible to get a credit of such amount through Form 26AS or TDS certificate issued by the deductor.

The basis of TDS Deduction

TDS is exempted in few cases. For instance, if you make the payment to the RBI or Central government. Along with this, TDS is exempted from the interest paid to the following

Income Tax act 1961 describes TDS as a spot tax which is deducted from the actual source of income.  It is applicable on the income received from financial products like interest received on fixed deposits, incentives from the employer, commission’s payments, dividends on bonds, sale/purchase or rent of any immovable property and money earned as lottery or awards.

The rates at which TDS is charged is declared under various provisions of the Income Tax Act or the first schedule of the Finance Act. If this payment is to non-resident citizens, then the provisions of withholding tax rates under the Double Taxation Avoidance agreement shall also be considered. 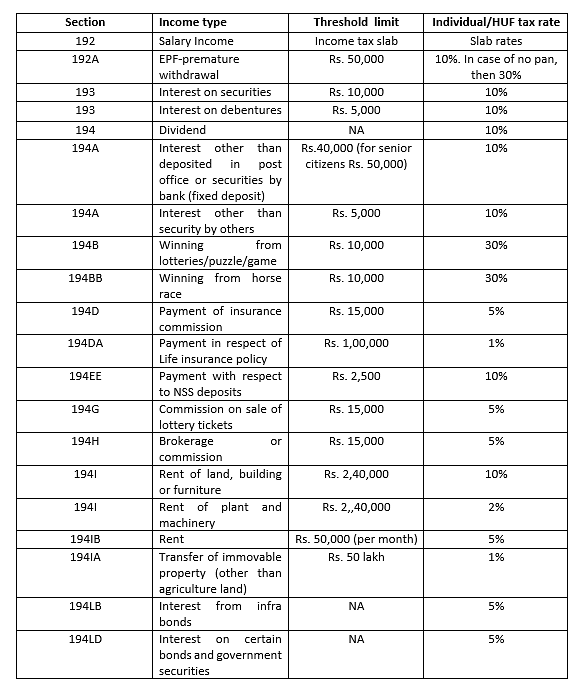 Tax deducted at source is supposed to be transferred to the credit of Central government account via the following ways:

Electronic mode: E-payment is necessary for

Physical mode: A person can file TDS by launching a challan 281 in the bank.

The exemption limit of Insurance commission is Rs.15,000. Earlier it was Rs.20,000. The TDS % is 5 but 20% when the PAN card is not furnished. The TDS rates for other commissions include:

According to section 194J, a person is liable to pay the TDS in the following payments

If the person possesses PAN card, he/she is supposed to pay 10% but when PAN card is not furnished, then higher rates are charged as follows

Under section 194C, the payment made to complete the contract for the following work is charged.

Exemptions of section 194A:

This article is written by Anubhav, who is a content writer at LegalRaasta.

LegalRaasta is a platform that offers tons of legal services like Income tax return filing, GST return filing and many more.